I hope everyone had a fun and safe New Years Eve.  Pretty quiet around here.  I have come down with a miserable cold and didn't even get out of my PJ's New Years Day.  A lot of you have been reviewing 2013, but I have decided to look ahead to 2014 instead.  The first 6 months of last year were pretty stressful with my mom being sick and then passing away and all the doctor's appointment for me while trying to find out what was going on with me.  The second half of the year was pretty uneventful except for the fun time at the Tall Ship Festival in Duluth.  And then of course Christmas Eve was pretty special with my daughter getting engaged.  You can read about that in my last post.

I'm not making any New Year's Resolutions because I don't usually keep them anyway.  I do better if I set goals for myself.  The biggest goal for this year is to clean out and organize my basement.  I had started that last year but then after mom passed away, all of her things ended up in my basement.  Wish me luck because it looks like I am a hoarder.  Well maybe I am.  I have some fun things to look forward to this year.  One being my daughter's wedding and possibly some traveling!

It has been way to cold here to go out and take pictures so I have been taking some through the windows.
This one if on New Years Eve morning with the snow coming down. 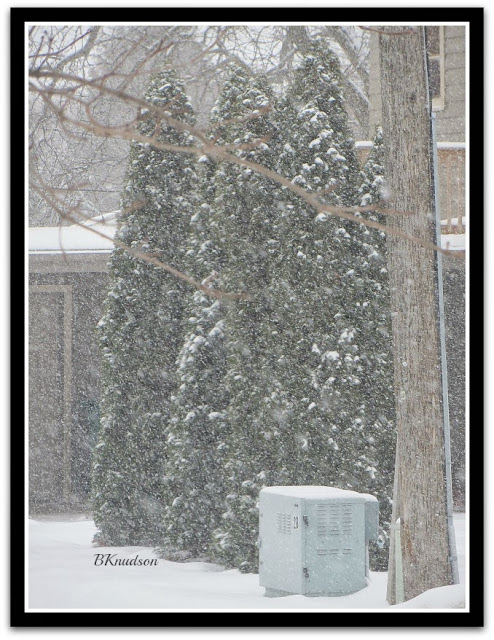 These 2 were taken this morning with the frost on the windows. The sun was shining brightly.  But the frost was so thick you can't even see anything outside except a few speckles of sun shining through. 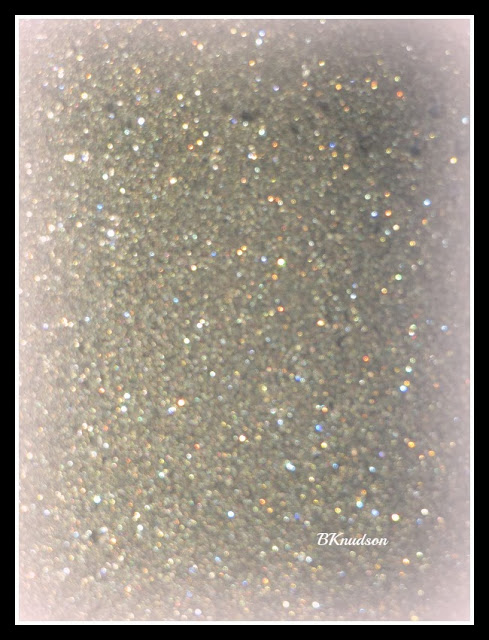 The frost does really  make for some interesting patterns. 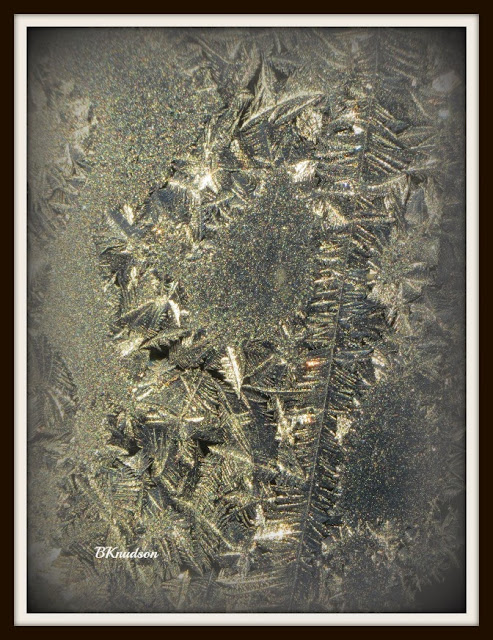 Thanks to all of you for following along with me and all your nice comments.  They mean a lot to me.


Until next time
Barb

Posted by Grandma Barb's This and That at 6:55 PM

I'm not doing any reviewing either Barb..I'm just happy I made it out fairly healthy and with all the family doing well.

Happy New Year to you- and don't work too hard in the basement!

New Year's Resolutions are an annoyance...I have yet to meet anyone who actually achieves them. =D

I do wish you well as you work your way through your mother's things. I am still plugging away three years later. It is a job!

Cleaning the basement sounds like a sensible goal, Barb. I have a small room that seems more like a closet that needs clearing!

I prefer the idea of looking ahead instead of back, and it sounds like you have a couple of good events to look forward to!

I had meant to clear out my basement too, Barb, but haven't finished that mission yet. This year!

I like the frost pictures. The one with the sun behind looks like it has little coloured jewels.

Happy New Year, Barb. I hope that you feel better Quickly. So much better to focus on the now and look ahead to a wonderful future. xo Laura

Cleaning out the basement can be a huge chore. Best of luck to you Barb!

I've been thinking about you as I hear about the bitter cold in Minnesota. I hope you're staying warm! I'm not looking back, either - much prefer to look forward. I'm with you on the resolutions - goals sound like a good idea. I need to give that some thought - hopefully before 2015 rolls around. Happy New Year, Barb!

Good luck on your basement cleaning! When my mother died several years back we cleaned out her apartment in just a few days, and a lot went right into a dumpster, more to the church rummage sale, and the remainder found a home at my sister's. As we were flying home, I had room for only a few keepsakes. I think that was probably a very good thing! My basement has been on my goal list for a long time too, and I'm determined it will happen in the next few months, along with all the clutter in my home office. I think I need a cleaning fairy....

Barb, It looks cold there! It's cold here in Breckenridge, too-minus 11 windchill this AM. No resolutions for me, either. I did a major cleanup through Nov/Dec when we were having remodeling done. It feels good to have less!

some years have more trials than tribulations. Take care of you Barb and you can work your way through 2014 with some new goals at the fore. Likewise - clearing out (especially what had been a craft-room) is more goal.

that's some pretty frost - as long as you don't have to scrape it. :) so sorry you caught a cold. maybe you can convince your daughter to come help you a few hours at a time to clean out that basement. make it a fun project with lots of memories and laughs. :)

Love your snowy and frosty photos today, Barb. The second one is so unique. Have fun sorting things in the basement. That's a big job and sometimes difficult to part with memories. All the best to you. Hugs, Pam

I need to clean my basement in the worst way. We have foundation work going on now that will hopefully and finally keep our basement dry. So now I'm anxious to get it cleaned and I mean cleared of stuff we've accumulated for too long. I'm trying to learn to live by the motto "if you don't love it or use it, get rid of it".
Wishing you the very best New Year!

Oh Barb, I love your frost photos!
I never look back, except to say goodbye. I rarely look forward, beyond what planning is necessary. I live in the moment, because that is where life is. Wishing all the best in 2014

It looks cold by you, here in Holland it is 10 degrees.

Dearest Barb,
I am really sorry to hear about your cold, not a good season to have it, isn't it! Where I live, there are only a couple of times of light snow fall during the winter and I was amazed to see your pictures of frost.Making me feel to see them with my own eyes p;)
With my age, easy to look back; but I also wish to look ahead. (please forgive me if my memory is wrong. Our last year was a bit tough)

Wishing our year 2014 will be a bright one♪♪♪
Lots of Love and hugs from Japan, xoxo Miyako*,

PS> I've made some typos in the former comment. Please delete it(^^;)

Oh, I'm sorry to hear you have had a bad cold...with this weather, it just makes you want to hibernate, doesn't it? Hope you are feeling better soon!

Happy New Year Barb, hope its a better one for you. Love the frosty pics,
Joy x x x

Some years are better than others. I'm not a resolution maker, either. Why set myself up for failure, I say! Life is hard enough. You've been through a lot - hoping this year turns out to be a lot better for you and your daughter's wedding will be something to look forward to. My son is getting married this year, too. I lost my Mom 3 years ago in March. Lost my Dad last year. It's tough - you feel like an orphan no matter how old you get. Hang in there, it gets better and you can talk about all those wonderful memories without tearing up. It just takes time. Cleaning out the basement will help keep you busy. I find that keeping busy always helps. Hugs xo Karen

Barb, Happy New Year! I wish you all the best in 2014! I think goals are much better than resolutions! Have a happy day and weekend!

what interesting and pretty frost winter photos... I recently opened a box of my Mom's things, I'd looked in it before but that was 25 years ago, she died 27 years ago, in it are all the letters I'd ever written to them and letters they'd written to me. Fabulous find but tear producing too.Good luck with your Mom's things. Bitter sweet.

Oh Barb Happy New Year I do hope you feel better soon. I spend most of my days in my PJ'S:) It is so exciting we will both be planning and watching wedding plans. Congratulations. Feel better OK Hug B

I totally agree with your idea about the review of 13 and looking forward. To me that's more exciting. I also am not interested in make resolutions. At this point in my life, I feel like I should already have things in order and it is short term and long term goals (jobs) that we set sometimes daily. Stay warm and keep finding those interesting shots. Love these and I bet you have more in your house?

I don't do resolutions either. Figured out many years ago that I never keep them. Cleaning the basement is on my list, though. Feel better soon!

JoAnn ( Scene Through My Eyes) said...

Sounds like a great plan - baby steps - start with baby steps - and soon you'll be up and running. I have to get into my studio and do some work on organizing in there too - good luck to us both.

i love the frosty shots. so cold looking. you stay warm. Happy New Year!! may it be a great one with many great shots to share. ( :

Really pretty photos! I wish you the best with your goals for the new year. I hope your 2014 is great :)

Beautiful shots! I hope you're getting over your cold!