Friday was one of the nicest days we have had in a long time.  It was sunny in the morning when I took my friend to Sioux Falls for a doctor's appointment. It did turn cloudy in the afternoon but was able to reach 37 degrees.

After the doctor's appointment we drove down to Falls Park where the Big Sioux River spills over the falls.  Of course they were frozen. 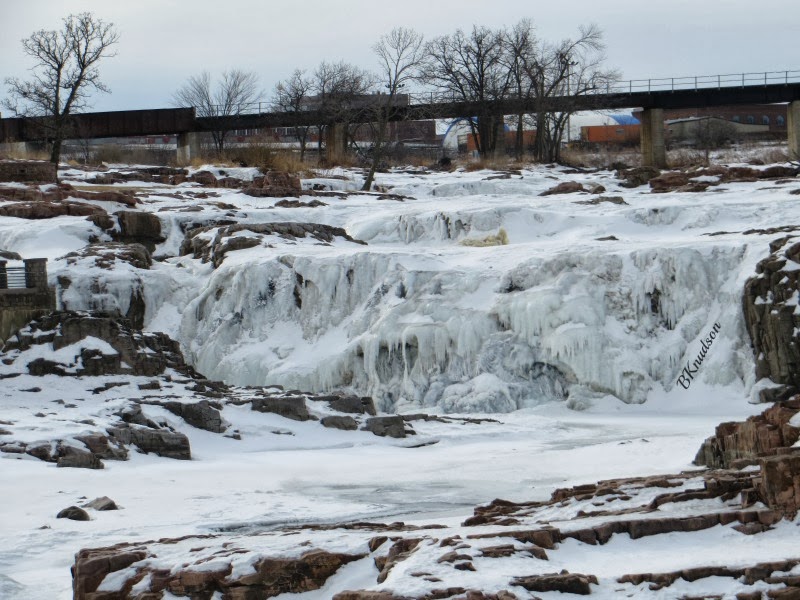 This building was a Light and Power Company Building built in 1908 and is now turned into the Falls Overlook Cafe. 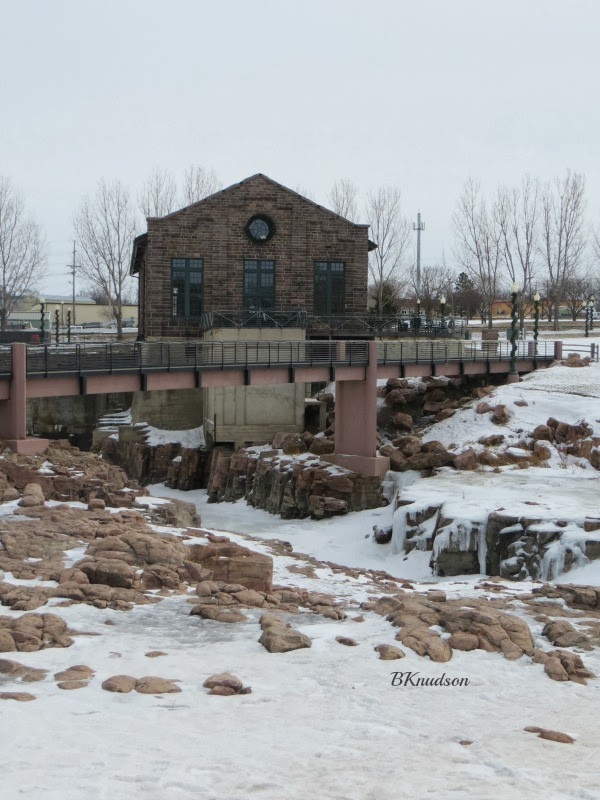 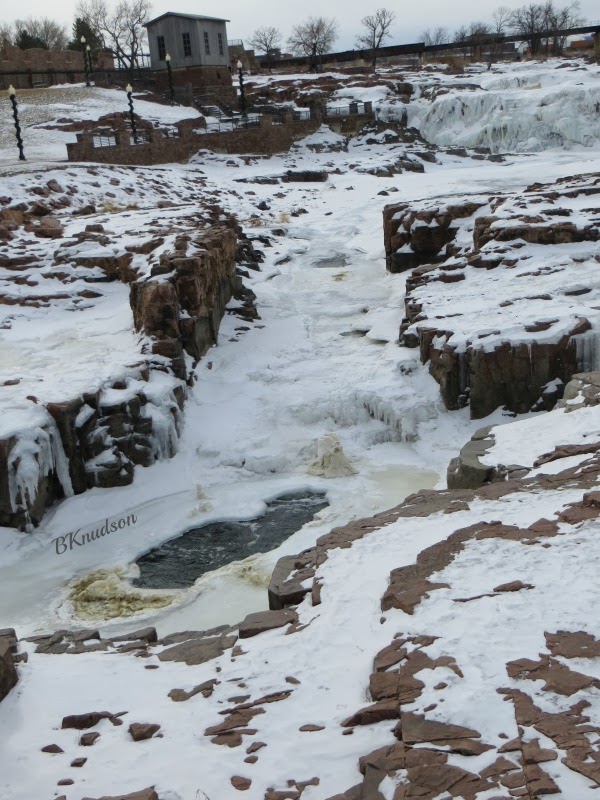 A closer look at the falls 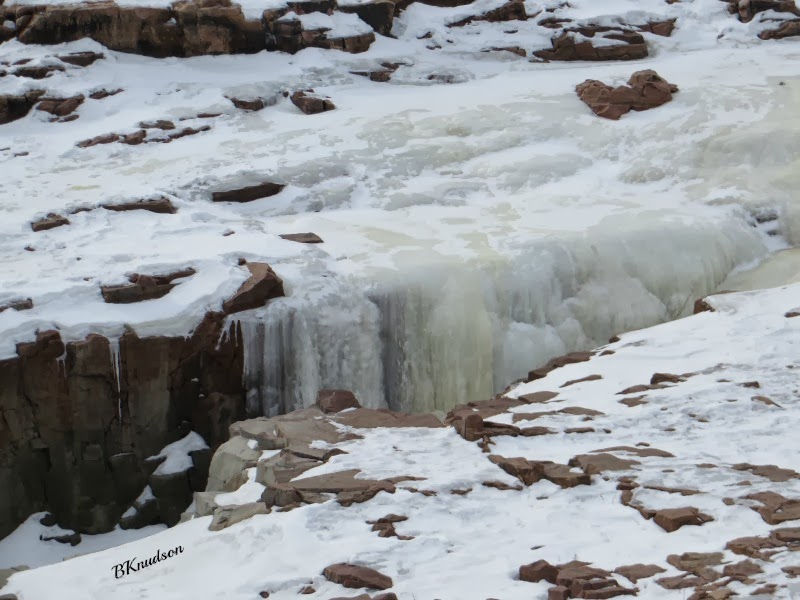 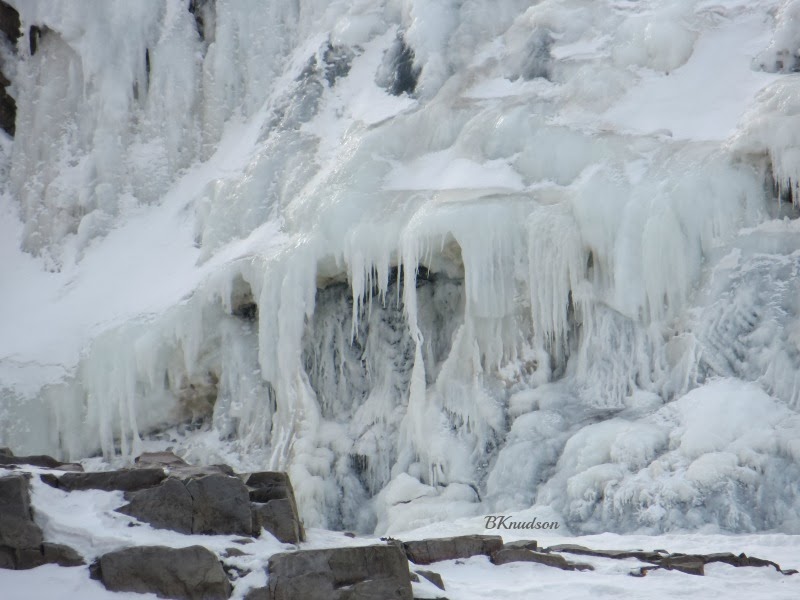 You can read more about the falls and see photos of them during the summer here
http://visitsiouxfalls.com/visitors/things-to-do/falls-park/

Linking to Our World Tuesday

Thanks for stopping.  Have a great week
Until Next Time
Barb
Posted by Grandma Barb's This and That at 9:47 PM

Great pics, but seriously, I am tired of winter. :-)

This looks like a great place to visit in any season!

I'm not a big fan of ice, but that must be an awesome sight. Beautiful photos, as always!

What a fabulous series of shots!

I haven't been to Sioux Falls since I was...hmmm ....16.
Wonderful photos, the Cafe looks like a great place to visit and falls look almost sculptural with all that ice.

Wow! Thats simply great! I haven't seen anything like that!

Its been a very long time since I have seen something like this. What a great place to visit.

What a great place for a restaurant. Such lovely views!

It is neat to see the falls frozen. Lovely shots and a pretty view! Have a happy week!

These are definitely COLD winter shots. I need to get in the car today and ride out to see what the waterfalls near our home look like. It is so very cold this morning I bet they are still frozen. When you think about how the falls flow in the summer, it is hard to imagine they could be frozen so solid in the winter. GORGEOUS images.

I'd love to visit that cafe! You've had quite a stretch of frigid weather. We're experiencing an article blast right now, too. I do love the frozen photos!

This is beautiful Barb your shots capture the cold and beauty equally. Hug B

Hi Barb, beautiful frozen photos and so cold. You captured the falls perfectly with your camera.
Stay warm~ I am so ready for spring. Even here we are so very cold for our area.
Have a great week.
Hugs

really cool! (no pun intended). i'd love to eat there during the summer.

Beautiful...looks like they are straight out of the freezer...gorgeous series....

That is some serious cold to freeze all that water. Wow. It is beautiful though. Dining at that cafe when the falls are flowing would be so nice. Beautiful images!

Pretty! And a wonderment. So cold that moving water freezes. The fountains around here have been frozen for a few weeks.

Its like water is telling us time is frozen for the moment. Seems like even this far south we can't get out of this rotating weather of not a teaser day of 40 to 50 only to plummet back to zero. It's not unheard of as we do expect a winter like this about once every decade. Stay warm dear. enJOYed the shots you shared.

Wow, they really are frozen over! It looks pretty, but oh so cold.

those icicles look so cold. i hope you are staying warm. safe travels. so fun!! ( :

going to look at that link you gave us now ...

I love it when they repurpose old buildings. : )

Look at all that ice -- wow it's beautiful and your photos have made it very interesting to go check that area out next time we travel in that area.. Thanks for sharing..

How pretty these photos are, Barb! The cafe' is wonderful and what a beautiful place. It's amazing to see water falls frozen! I hope this is the last of the cold weather for you - a winter everyone will remember, I am sure. Hugs xo Karen

So cool!! These are just gorgeous, I love winter!!

The frozen falls make for some pretty amazing shapes.

That was a nice side trip Barb. Beautiful photos of the frozen falls. I imagine in summer it must be very pretty and it would be nice to dine in the cafe. Blessings, Pam

What a neat place to visit especially in the winter.

What a beautiful spot for a cafe. The frozen falls make a beautiful display.
I hope your weather warms up soon, Barb.

That is interesting to see the falls frozen! That's really nice that they used the old building to be a restaurant. What a great spot to dine (perhaps more fun in the summer though)!

Oh I am so tired of winter.

I see other people have put up pretty flowers which makes me think more. Spring is coming to Canada.

You have an absolutely fantastic blog. You are amazing blogger.
I ♥ your blog!

How beautiful can be frozen water! I am waiting when our water fall will freeze but it looks that it will not happen this winter.

Barb, these are awesome pictures!

Far Side of Fifty said...

I have been through there but never taken the time to stop and see the Falls. They are kinda pretty frozen:)

Awesome shots Barb, how cold is it there? I'm waiting for this big snow we are supposed to get, but the forecasters can't seem to make up their minds about it! The temps just go up the scale and back down..everyone is getting sick...I really, really do not like winter.

The frozen falls are absolutely stunning!!

My goodness Barb, that is very interesting. The firs photo almost looks like sludge or heavy grease. silly me. lol

Yes I love to wear black tops, sweaters or whatever with blue jeans. Have loved that look for years and years.

Beautiful, Sioux Falls is where my Dad finished high school.

Love this image of the falls frozen in time. Amazing!
Hugs,0
Patti