Have any  of you ever  been to a cattle auction?  I had never been to one until last week.  Remember the post I  did of the barn that burned.  This is at the same farm and they had been planning to hold the auction in that old barn.  They ended up having it in the work shop.  Here are a few photos.


Some of the cattle to be auctioned off 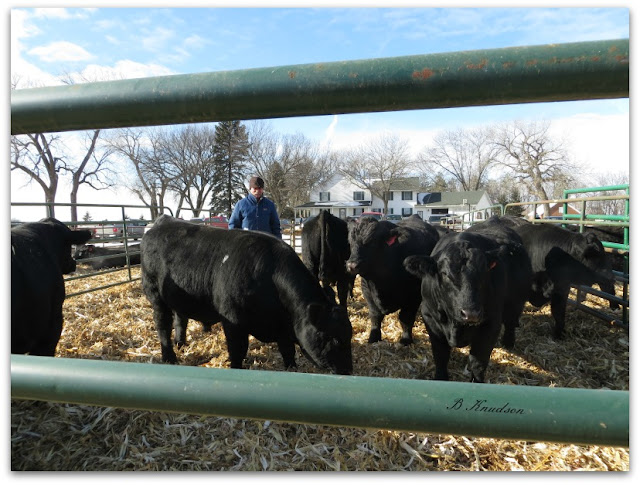 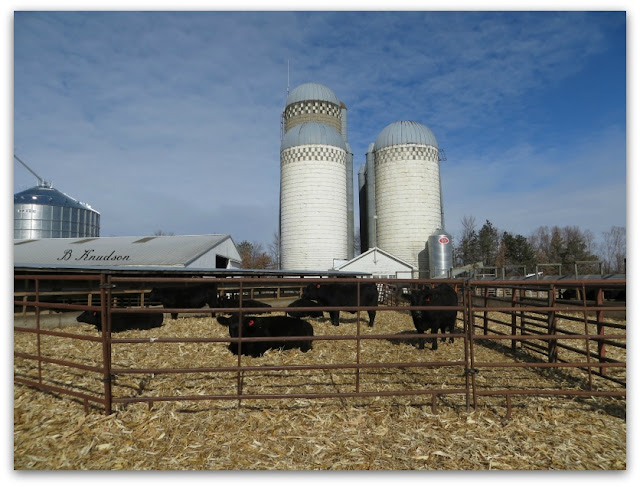 You can see some of the pickups and trailers that were there.  These people were ready to buy! 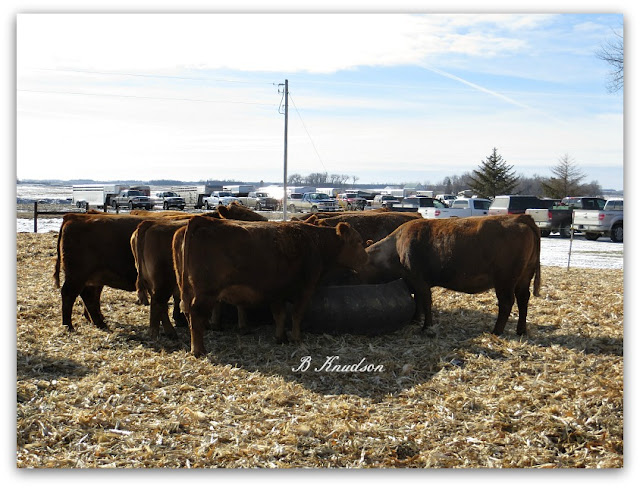 The auctioneer and helpers plus part of the bidders 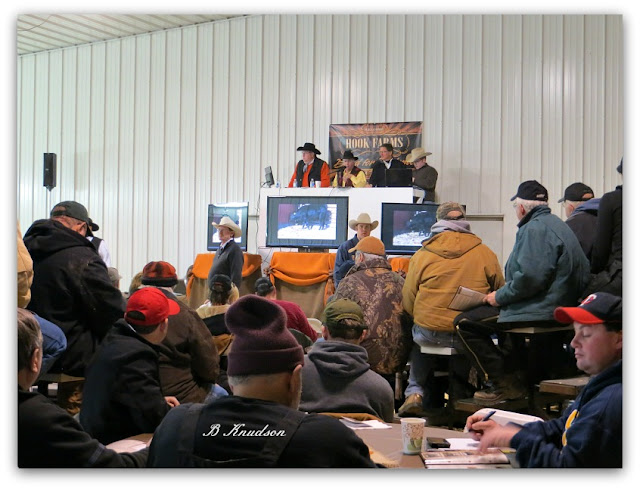 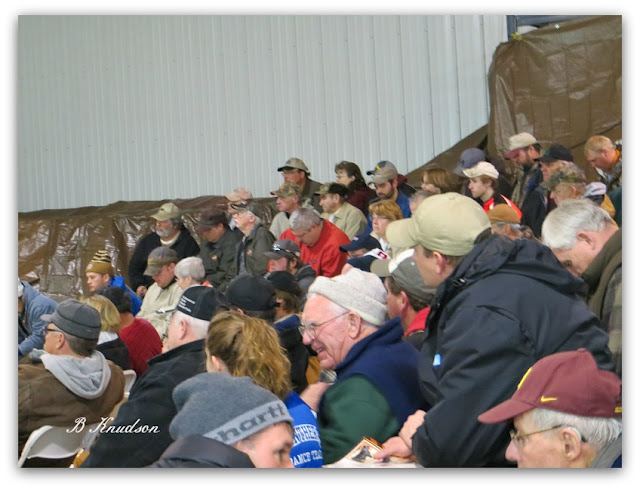 Close up of the auctioneer and helpers who  were taking bids on line, over the phone, and from the crowd. 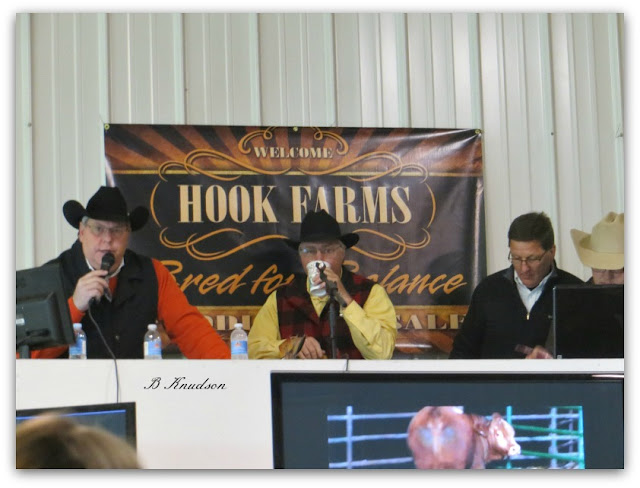 TV's were placed in front of the auctioneer so bidders could see what they were bidding on.
They also had a sale catalog with individual pictures of all the cattle being sold. 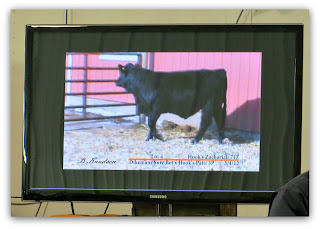 A different experience for me.  I hope you enjoyed the auction.

Thanks for stopping by!  Have a great day.

Barb
Posted by Grandma Barb's This and That at 2:31 PM

I've never been to one myself, but it looks like something I would love to attend.

i could handle a beef cattle auction better than a dairy cattle sale. to watch a farmer and his family sell their dairy herd - milked and handled twice a day for years - is just too hard.

Somewhere back in my memory I think my Dad took me to the local livestock barn but it's just a fuzzy image. :)
LOVE those silos with the patterned tops!

I have been to quite a few auctions in my day, but never a cattle auction. It sounds very interesting.

I've been to horse auctions and I go to antique auctions regularly, but never to a cattle auction. Bet it was fun :)

What a neat experience, a cow auction. Did you bid? Your photos are great, I especially love the second shot. But, I also love the cow photos. Thanks for sharing, have a great evening!

It's been years since I've gone to a livestock auction of any kind; my Pa (grandfather) always took me along.

LOVE this series of images... it's been years since I was at a livestock auction. We went monthly as a kids... and I loved it! Your use of natural framing with the fence rails is pleasing... Thank you for joining in 'Rurality Blog Hop #1' Hope to see you next Wednesday for #2...

though many years back I did live rural and fattened young 'poddies' as we called them for market, I never did get to an auction. Neat post and a new experience. It quite astounds me sometimes, quite where our lifestyles might twist and turn

Very different from our auctions in Texas. You see them in something much like a rodeo ring - no TV or photos or online stuff. They also can be quite cruel - where the auction staff take electrified prods to coax the cattle through the various chutes into the ring. Donkeys are usually treated pretty poorly at auctions also. I steer clear of them.

Brings back memories as I have been to a few of those as a child. Great story!

I have never been to an auction where bids were taken online or over the phone.

I have went to many cattle auctions..the last being the one where my gramma B's cows were auctioned off. It was a sad day for us. Take care, Janice

Ive never been to one but it looks really interesting. I'd love to actually go to one.
~Robyn~

Leave It To Davis said...

They all look like nice, friendly folk. The cows look very healthy, too. A lot of the cattle ranchers around our part sold off a lot of their herds because of the drought. I hope we get rain this spring, though they say we won't, so they will stock up again.

I have never been, but assume they talk in that funny auction talk. I have no idea how anyone understands that! You got some great pictures but that second one is WoW!

I have never been, but assume they talk in that funny auction talk. I have no idea how anyone understands that! You got some great pictures but that second one is WoW!

I've never been, and this looks very interesting - but I think there's a part of me that would feel a little heartbroken. Animals just have such doleful eyes. It's a good thing the world isn't dependent upon me to provide the food supply!

That looks really interesting. I have been to many flower auctions when I was young and it always was exciting.

Fascinating post for Rural ~ Living in New England it is delightful to read and photography is Wonderful!

i've never been to one, thanks for taking me along!

I think that would be a rather interesting experience, Barb. Thanks for the photos and explanation. (I hope your mom is getting to feel settled into her new home.)
-Karen

Your pics are about the closest I will get to a cattle auction...thanks for sharing...looks like it would be interesting to watch.

I remember my grandfather going to the "sale barn". I always wanted to go with him, but never got to go. "You might get hurt". Yes, sheltered.

Wonderful farm photos! I bet it was interesting being at the auction!

they auction cattle and goats and all kinds of live animals at the Pa farm show...so intresting and fun to watch! especially since we had NO idea how much these animals sell for...

Yes, I've been to a cattle auction and have also raised cattle. This brings back memories. thanks for sharing.

No cattle- only horse sales, but probably the same atmosphere, and maybe the same high dollar bids!

I've never been to a cattle auction either. Nice to learn something new today. :-)

I have never been to auctions.I like to see the people in the fifth photo. Very interesting!
Tomoko

It's been years since I went to a cattle auction, but there was a time when I did it regularly...not because I was buying, but because I had a friend who was and I just loved the atmosphere.

I love the cow photo's. Thanks for telling about this interesting event, Barb.

That looks like an interesting experience! Those are gorgeous cattle!

I always get a kick out of how they pretty up the auction pen with fresh cover -- looks like these would be some great cattle to own. :)

No, I have never been to a cattle auction...and it was interesting seeing your photos from it.

Looks interesting for the cattle auction. Attending it was fun.

No, I've never been and have only seen them reenacted in movies and such. It must have been pretty interesting.

I've never been to a cattle auction, but I have been to a horse auction and that was fun and very interesting. In fact, we even bought one of our horses at an auction, but that was many, many years ago. Thanks for sharing.
Cindy

I remember going to auctions when I was a kid at The Sale Barn here in Poplar Bluff... lots & lots to see! =)

love those silos ...neat shots. i have never been to an auction. ( :

I hope your Mom is well and happy at home.

I always Liked going to the auction. We used to go to the horse auction. Britton Brothers in Snohomish--it's not there anymore. MB

Haven't attended a cattle auction, but toured some cattle farms back in my working days with Kentucky Farm Bureau. Just tonight I was reading a news report about a friend whose son is having problems with cattle rustling on his farm. Shocked at how valuable the cattle are.

I loved this post. Yes, to answer your question, I have been to an auction. When growing up in Colorado, the big 'event' of the year in Denver was the stock show...afterwards, of course, the auction.

Far Side of Fifty said...

We used to go to them all the time when I was growing up they wee called Sales Barns back then and one or two days a week they would have auctions. Looks like you were at a fancy cattle auction with booklets and everything:)

How fun...never been to an cattle auction. Love that pic with the bright blue sky. Lovely!!

How fun! We watched part of a cattle auction last week on tv, I'm sure it's even better in person!