The Falls in Sioux Falls

After spending 5 days in Sioux Falls at the hospital with my mom, I'm back.  On Friday she was having chest pains and was taken to the ER at the local hospital.  Her heart rate was in the 30's, way too low!  The local doctor thought she had either had a heart attack or was about to have one.  He wanted to fly her right to Sioux Falls but neither a helicopter nor a fixed wing plane could land because of weather.  So she went by ambulance with the doctor riding along to keep her stable.  When she got to the hospital in Sioux Falls they found out she had not had a heart attack and took her off a couple of meds that can lower heart rate  This did help to bring it back up.  So they monitored her for a couple of days to see if it would stay stable.  But she a couple of times it went back down into the 30's so on Monday morning they put in a pacemaker.  She is doing fine now and I brought her home yesterday.  What a Happy New Years Day!

While I was in Sioux Falls I remembered the pictures of the Falls I had taken in September when I was there for my angiogram.  Since I had never posted them I thought I would now.  It was only a few years ago that I even learned there were falls there. dah  I didn't get out to take any photos of them in the snow.  It was so cold and I wanted to just stay with my mom. 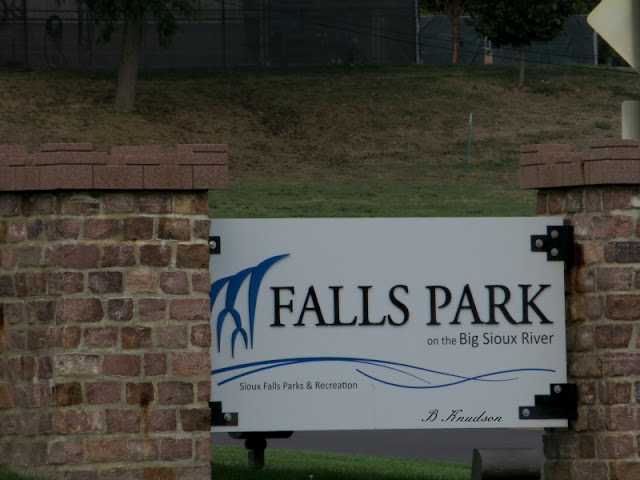 I found this timeline interesting. 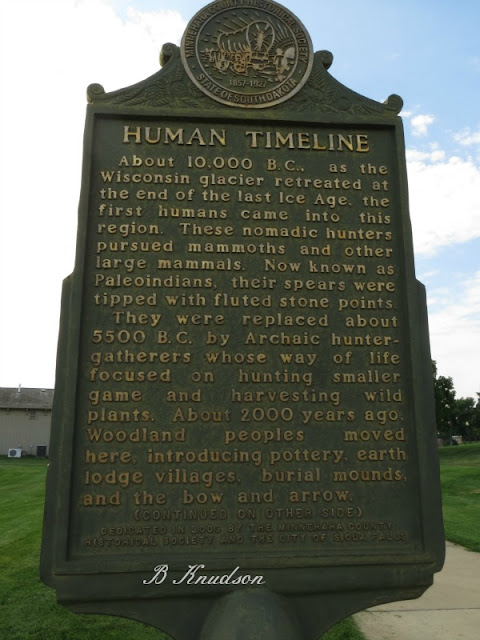 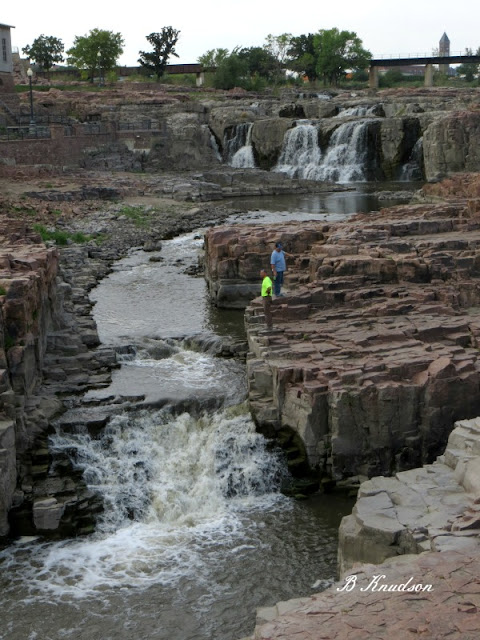 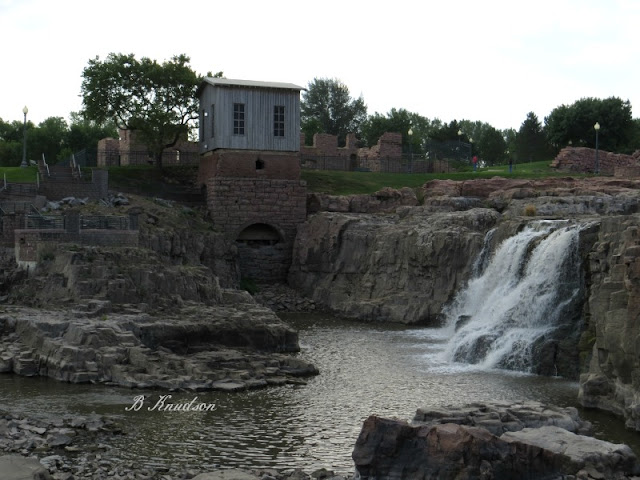 I want to wish all my loyal followers and all my new followers a Happy New Year!  Thanks for following along with me this past year.  I appreciated everyone of you and your comments and encouragement.  I will try to catch up with all of you soon.  Have a wonderful first week of 2013.

Posted by Grandma Barb's This and That at 12:45 PM

I am so glad to read that your Mum is doing well now.
You must have got a dreadful fright.

Your photos are great.

Wishing you and your family a happy and healthy new year.
I hope that 2013 will be a good year for all of you

Happy New Year, Barb, so pleased that your Mum is back home. Lovely pics of the falls,
Joy x x

thinking about ya & your mom. glad you had chance to see these sights. nice.

So sorry about the scare with your mom, but sounds like she is on the mend, so that's great news.

Lovely photos! Looks like a beautiful place to visit.

Well, I've been to Sioux Falls a few times and have never seen the falls, so don't feel too foolish. :)

Glad your mom is on the mend.

hugs to you and your mom.. Nothing scarier than having an ill family member..Glad to hear she is doing better. Hope 2013 brings lots of blessing your way.
hugs, Cherry

That kind of bradcardic heart rate is quite scary. I am sorry both of you had to go through that. I am glad your mom is back home. Happy New Year. big hugs, olive

Barb! wow! I have missed you and now know why. I sure hope your Mom's health continues to improve. Thanks for the well wishes and I have to say "back at cha". You have a great 2013! k?

Yikes, health scares are the worst. I am glad she is doing better. Prayers for you both.

very sorry to hear of the trying times for your mom (and you, of course!) i do hope she will be stable and healthy going forward.

they are lovely falls. :)

I am glad that your mom is doing better!!

Hi Barb. I'm sorry that you had such a trying time with your mother's health but happy she is doing so well now. The Sioux Falls look like they would be really beautiful when full of water as it looks low in the summer time. Spring must be quite a show. Wishing you blessings for this new year. Pamela

I'm glad your mom is better now, Barb. The whole experience must have been difficult for her and for you as well; I hope you're feeling well.

The falls look really beautiful. I like the sound of rushing water, for some reason.

Wishing you, your mom, and the rest of your family a Happy New Year.

The Falls are beautiful!
Glad your mom is home. I'm having similar trouble with my Dad, but his pulse is too high. They've done a few procedures and are talking about a pacemaker.
Happy New Year!

...it has been a difficult time for you Barb and I'm so glad to know there is a good ending and your Mum is getting along much better now. Beautiful photos of the falls. Best wishes....

Thank God for good doctors and the right diagnosis. So happy to hear she is home and doing well. Thanks for the little visit to Sioux Falls, never been there. Here's to good health in the new year!!

So glad your Mother is doing better - no better way to start a new year than that.
Your photos are just beautiful. I bet they are gorgeous with snow on them. Stay warm.
Cindy

I'm thankful to hear your Mom is better and back home.
These photos you have shared are so pretty.
God bless you in the new year.

So sorry you had such a scare with your Mom, Barb! I am glad to hear she is much better and was able to come home...a New Year's blessing indeed! These falls are wonderful! What an interesting place it must be to visit. Wishing you all the best in 2013!

So happy that your mom is doing well, Barb. I know how scary that can be. Happy New Year, sweet friend.
hugs,
Laura

Glad to hear she is doing better. Hope 2013 treats you all well.

Most interesting. Its seems logical a city with such a name has a nice falls but I'd never seen it on our many trips from Minnesota to Montanas trout streams...:)

Glad to hear your mom is doing fine Barb. Loved the pics of the falls. Here in Michigan we have a set of falls that we call the root beer falls as they are shades of brown. Take care, Janice

Sorry you and your mother had such a scare. Hope she continues to do well with her pacemaker.
The falls are beautiful!
Happy New Year to you and yours!

Glad to read that your Mom is doing better.... what a worry.

Love the pictures!
Interesting information too.

Hope that this is a wonderful New Year for you, and for your family.

I hope your mother continues to improve and I'm glad she's home from the hospital!

Those are gorgeous falls! Love the big rock faces!

Oh my, I'm glad your mom is doing better! I've never been to Sioux Falls, but it looks like a beautiful place to visit. Happy New Year!

Thankful your mother is better! Love the photos of the falls.

I hope the pacemaker solvers your mom's problems. Well, at least you remembered you had these lovely photos of the falls. I wish you peace and joy in 2013!

Those falls are awesome....sounds like your New Year started with a bang..

I hope your Mom will continue to improve and be as healthy and happy as ever.
Its not easy to watch a loved one who is not well.
I will pray for you both, Barb. Take care of yourself.

Thanks for sharing your beautiful photos of the falls.

I'm so glad your mom is doing better, Barb. Scary time for both of you. I'm glad you shared your lovely photos of Sioux Falls. I've always been curious about that area, and the falls. Now I know a little more about it. Thank you. -- Nancy