The other day it was sunny and 54 degrees here in Minnesota.  I was itching to get out in the garden.  But it's way to early for that.  So I decided I would take a slip from my geranium that was looking like Jack's Beanstalk.  At least doing that I would get my hands in dirt.  Here is a before look. 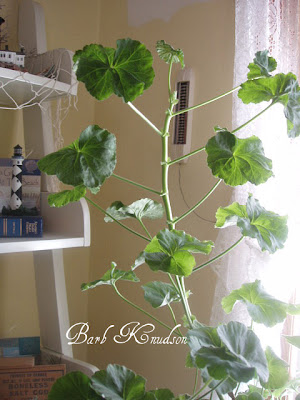 Look how tall that new growth is. 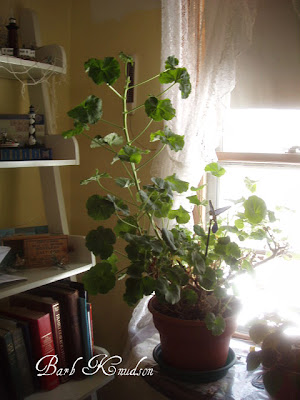 Here is what it looked like afterwards.  It's still big. 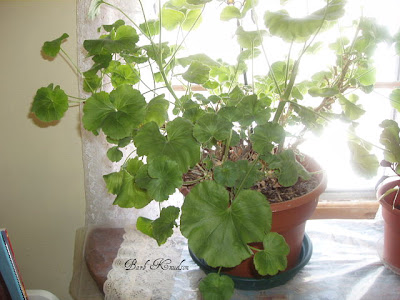 After cutting off the top part, I planted it in another pot.  I added some crushed up egg shells to the dirt.  I had read that gives the soil some rich protein.  We'll see if that helps get the new plant rooted.  So far it's looking good.  Here's what it looks like. 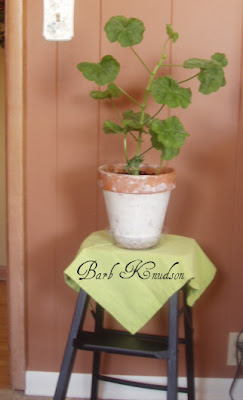 I've taken cuttings from plants before but never any this big.  I have a few ivy plants growing that I took cuttings from  my window boxes last fall.  They look pretty good so hopefully they survive and I can plant them in the window boxes this spring. 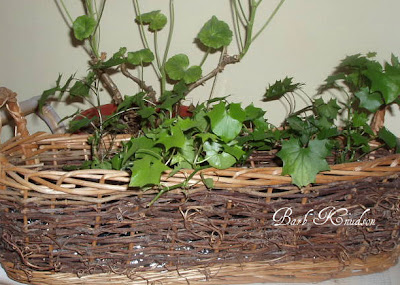 Later that day  I walked into the room where my geranium is and noticed it's shadow on the wall.  I just had to capture that. 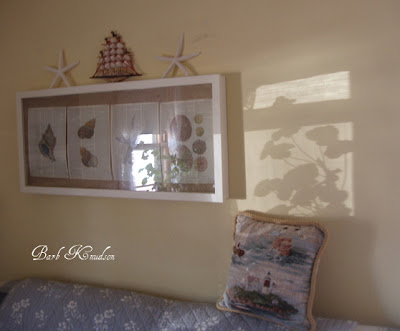 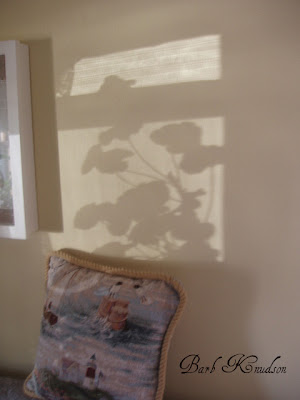 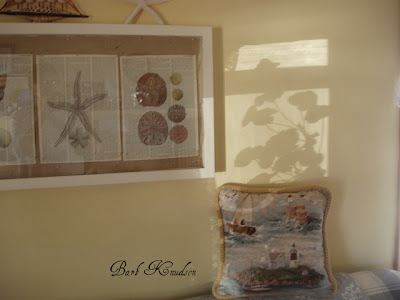 Linking to Sunlit Sunday at My Little Home and Garden  Stop over and see what's going on and enjoy some sunshine.
I hope you are all having a good weekend!
Until next time,
Barb
PS. I've added a new way for you to follow after Google Friend Connect goes away.  It's called Linky Followers and I've put it on my sidebar. I hope you continue to follow along.
Posted by Grandma Barb's This and That at 8:50 PM

a delightful post; do your potted geraniums indoors flower o.k. or you just 'winter them over'? The shadow on the wall certainly made for a charming photograph. So Googgle Friend Connect is being abandoned?

Enjoyed your post. You must have a green thumb. I can grow about anything outdoors, but am not good with houseplants! I especially like your shadow shots. Fun!

I only wish I had a green thumb for indoor plants. I neglect them when they are inside. I love the shadow photo. I'm now following you on Linky follower. Happy Sunday, Gail

Your geranium looks wonderful. Great capture of the shadow when the sun peeked in through the window.

Barb,
Perhaps I should be keeping the eggshells out of my compost pail and start crushing them for the plants. Thanks for the tip and for linking to Sunlit Sunday. (I'll have to look into the Google Friend Connect change and find out more information.)
-Karen

Geraniums are one of my favs which is lucky as for most of the winter we have to share house with them as it's too cold outside.

This makes me wish that I'd taken cuttings from my geraniums in the fall - you'll have such a good head start!

That's the biggest geranium I've ever seen! I've finally got a place to overwinter them so maybe I'll buy one or twenty!

Hi Barb,
I love the geranium shadow images! Hope it warms up soon so we can get out in our gardens. 54 degrees is nice for winter though! I'll take it.
-Lynn

The geranium shadow looks interesting and before long you'll have flowers to catch the sunlight.

Very interesting shots especially of the shadow. I love geraniums. Over from Sunlit Sunday. Been on retreat this week-end and just now getting to visit. Super bowel no big deal but I like to keep an eye on it.Gonna check out the linky follower. blessings
QMM

Oh how beautiful, Barb!!! Feel free to link up this post to the party--I'm sure people would love to come visit!
I hope you're enjoying the book--I'm so excited!!!
XO
Cindy

Your geranium looks so nice & healthy. If I had a green thumb like yours I'm sure my yard would be in much better shape. I can't wait to see the blooms. Thanks for sharing.

So fun and see the green of new plants, it's good it goes against our.
Thank you for your kind comments with me.
Have a great new week, hugs from Marit, Norway.

So fun and see the green of new plants, it's good it goes against our.
Thank you for your kind comments with me.
Have a great new week, hugs from Marit, Norway.

Hi Barb, You truly have a green thumb. I love the geranium indoors and it looks like it has done well since last summer. I plant them here as they seem to be able to take the heat, but they do not last for me over the winter. Great pics of the shadow. Love it.

Thank you for stopping by and your kind comment. You asked what medium I was painting in? The birds are all acrylics. Years ago I started out with oils and rembrandt oils for ink and scrub. Love it, but the dry time is too long for resale.

Have you picked up your brushes again? Have a great evening my friend.
Hugs, Celestina Marie

Congratulations on such a healthy geranium! I followed your Linky!

What a pretty post and images! I am following on GFC and Linky! Hope you will too!

What a lovely healthy plant!

Hope you are having a good week.

Barb, your pictures are always great! I agree, it will be so nice to get outdoors for some gardening! I have heard of the egg shell trick before, I might have to try that as well.